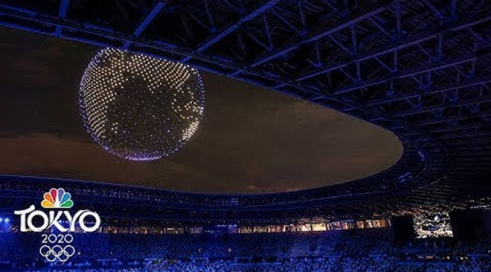 To be positive, if a country has to rely on advanced technology to deliver an event, Japan isn’t the worst option. But what about the participants themselves?

I felt sorry for the performers in the Olympic Opening Ceremony. During what felt like a dress rehearsal, they went through their paces in the empty stadium. The drones, technically flying robots, then became the stars of the show.  At least they were visible to the city’s population in the Tokyo skies.

The creators, with foresight, could have created the opening ceremony as a piece of film. Tracks of twenty video games featured in the soundtrack so could have been interesting. Nothing is intractable. But I found it moving that the Japanese delegates in the stadium almost waved their hands off by the end. Thanking, in person, the athletes for their efforts to be competitors in these games. The UK swimmer Adam Peaty has won the 100th medal since National Lottery funding began for athletes. He described, when interviewed by Radio Four, the five years of training prior as ‘an endless cycle of pain’.

The ‘pool action’ for Team GB has been amazing. These Olympics are having quite a lot of the feel good factor we so desperately need right now. But, Daiya Seto, hoping to swim to Gold for Japan, admitted he didn’t swim ‘fast enough’ in the qualifiers, knowing that the subsequent rounds would be more demanding. Olympic commentators believed a home crowd behind him might have changed all that.

The official Games mascots are two robots, designed to act as ‘Meeters and Greeters’. Robots were to ‘showcase their practical real-life deployment helping people’ according to Toyota. As I write, there is a robot playing basketball in Toyko. Take this to extreme, and why have human athletes or spectators at all?

In case I miss anything, an invite via my phone arrived to download the official Tokyo 2020 app. As ‘Your new friend for the Olympic Games’, the first thing it established was that I was following team GB. I’m now sorted for updates, timings and a live blog on ‘my team’. The app includes, no surprise, a FanZone. The zone is described as ‘an interactive gamification experience, to let fans worldwide connect with the Tokyo 2020 Olympic Games and with each other’.  People I am unlikely ever to meet in real life.

I am fortunate to currently be part of the Clore Social Digital Leadership programme. This encourages a deeper dive into not only what digital is, but what digital can do, for better or worse, such as use of AI. Digital advances throw up big questions for the voluntary sector, for instance where a charity has a high number of service users. Exactly how we use it will be the biggest challenge of all.

We will all have to up our digital game so to speak, in more ways than one.

Meanwhile, for sports fans there is still much to enjoy.  ‘See you’ in Paris 2024